Checking In With CMH

The Drop-off in Antipsychotic Prescribing in Philadelphia Medicaid

Between 2014 and 2018 in Philadelphia, the number of children with Medicaid who received an antipsychotic prescription fell by nearly 50%, as we described recently in BMC Psychiatry. The reduction was larger for children who were less than 10 years old and for youth enrolled in foster care, the latter of whom have historically higher rates of antipsychotic prescribing.

The drop-off in antipsychotic prescribing in Philadelphia Medicaid is likely attributable to several factors. Philadelphia started requiring providers to get prior authorization (i.e., pre-approval) before prescribing antipsychotics to children, which may explain our finding of a disproportionate decline in prescribing to youth who were less than 10 years old. And the larger-than-average reduction among foster-care enrolled youth may be attributable to Pennsylvania’s efforts to improve quality of care for this group, which came after joint work between the Pennsylvania Department of Human Services and CHOP’s PolicyLab. 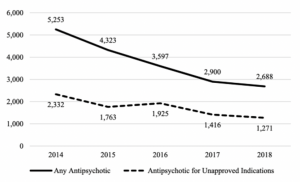 Hurray! @PHLPublicHealth is continuing their free, low-barrier vax clinic at PPP through February! Details below. Pls help us spread the word to folks who might be interested!