Waving Goodbye to the Buprenorphine Waiver

Opioid use disorder continues to afflict communities near and far. A major obstacle facing patients and their families is access to medication therapy, and one reason is the requirement that physicians and some advanced practitioners secure a federal waiver, undergo training, and have a patient cap for prescribing buprenorphine. Why do these barriers exist for a partial opioid agonist that can treat opioid use effectively when no such requirements exist for opioid painkillers? And why are states like Pennsylvania trying to introduce additional barriers to buprenorphine?

Across the US, opioid use disorder (OUD) continues to affect millions of Americans and their families, with scores of fatal overdoses occurring every day. In Philadelphia alone, more than 1,000 people died from an opioid overdose last year, which was more than three times the homicide rate. Despite a large drop in opioid prescribing recently, the US remains an outlier in this respect in the developed world. The influx of synthetic opioids like fentanyl, which are more potent and accessible than both prescription opioids or heroin, have added new challenges, and fentanyl is now involved in most opioid deaths. Unless patients can get the treatment they need, some experts predict that more than half a million Americans will die from OUD in the next decade.

Medication therapy for OUD, which encompasses buprenorphine, naltrexone, or methadone, is the first line treatment for OUD. Yet it remains inaccessible to many: only a third of patients diagnosed with OUD received any substance use treatment in 2017, and far fewer received medication due to widespread barriers to treatment. Some barriers are financial, such as not having insurance that covers treatment and the lack of treatment providers; others are socially-driven, especially stigma; but a few result from ill-conceived regulations and outdated laws. 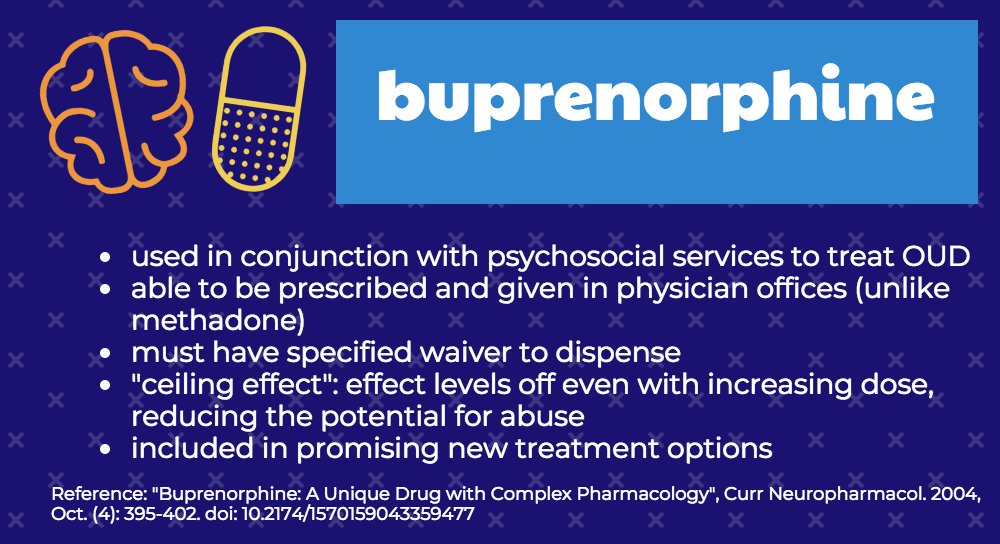 Take buprenorphine—while physicians have an unfettered ability to prescribe opioid painkillers, they must secure a federal waiver to prescribe a lifesaving drug to treat OUD. This hurdle exists because buprenorphine is considered a schedule III drug under the Controlled Substance Act of 1970, meaning that its medicinal use is restricted because it has potential for abuse. By comparison, prescription opioids are a schedule II drug, meaning the potential for abuse is even higher. Policymakers and providers have cited inadequate training in substance use treatment as the reason for this mandate, an argument that could apply to many chronic conditions commonly treated in primary care, such as obesity or depression.

The data supporting buprenorphine’s effectiveness for treating OUD are unassailable: it is a partial opioid agonist with less potential for diversion than methadone, it is safer for expectant mothers than methadone, and it can be administered via an implant that requires just one visit every six months. It also offers distinct advantages over methadone, which, by law, can be dispensed only in opioid treatment facilities in more limited quantities. Methadone treatment can be very costly to patients and their families, as they may be less able to maintain stable employment due to the required daily treks to a local (or not-so-local) clinics.

It’s high time for HHS, the DEA, and Congress to revisit these regulations and assess whom they’re helping and whom they’re hurting. Removing regulatory barriers to treatment are low-hanging fruit in stemming the opioid epidemic, and removing outdated barriers that do not benefit patients will allow us to move on to the more difficult problem: long-term remission. OUD does not start in a vacuum, so treating comorbid conditions and addressing social determinants of health that can serve as root causes for OUD is critical. And while the preponderance of evidence designates medication as the gold standard for treating OUD, we can also improve access to psychosocial services and increase our reliance on peer support to ensure that patients with OUD are able to restructure and rebuild their lives while being supported by their communities.

But first thing’s first—let’s wave goodbye to the buprenorphine waiver. Fortunately, the process is underway as three Democrat and three Republican members of Congress introduced a bill in May 2019 to remove the requirement. Unfortunately, this process will take time, especially when states are introducing new hurdles. In Pennsylvania, the Senate Bill 675 will require prescribers to register with the state to prescribe buprenorphine. It will cost up to $500 for a certification fee and also requires patients to participate in a licensed addiction treatment program before receiving a prescription. (After a 41-9 vote, it is now sitting with PA’s House of Representatives’ Human Services Committee.)

Existing and proposed barriers to buprenorphine prescribing will only delay treatment, and additional time is time that patients with OUD and their families cannot afford. In 2016, nearly half of US counties did not have a single provider who could prescribe buprenorphine. By removing the buprenorphine waiver, every county in the US would immediately have a provider that can prescribe the drug. While it’s far from a panacea, it would only make it easier for providers to treat patients with OUD using safe and effective treatments that have been shown to reduce relapse and decrease mortality.

Parents/caregivers: need help preparing for + navigating conversations with your kids about the #2020Election?