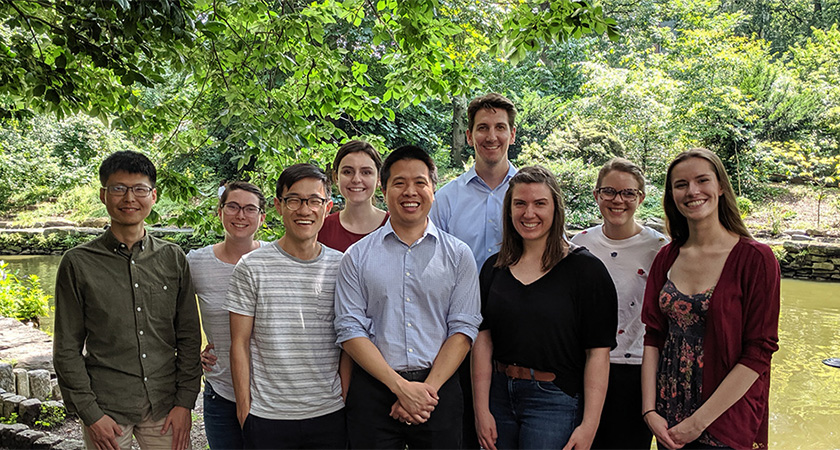 Our laboratory studies the spatial organization of the genome, with implications for gene regulation, genome integrity, and diseases such as cancer, aging, and neurodegenerative disorders. We use Drosophila and mammalian systems in combination with cellular, molecular, genetic, and computational tools to elucidate how the structure and position of chromosomes within the nucleus is established and inherited across cell divisions.

Visualizing the genome with Oligopaint FISH probes. Typically, studies of chromosome positioning have been stymied by the lack of affordable, high-resolution FISH probes, which are usually targeted to only a few loci at a time. Moreover, not only are conventional technologies not a practical source of probe for use in high-throughput methodologies, they fall short of revealing the location of whole chromosomes or specific sub-chromosomal regions in interphase nuclei. As a postdoctoral fellow, I co-developed Oligopaint FISH probes, which, in contrast to conventional probes, are computationally designed, synthesized on microarrays, and generated via PCR amplification. This strategy provides precise control over the sequences they target and allows for single and multicolor imaging at a fraction of the cost of conventional probes.

High-throughput FISH-based screening for novel architectural factors. The least understood aspects of spatial genome organization are the mechanisms that determine where a gene or genomic region is localized in the cell nucleus. As a postdoctoral fellow, I spearheaded the development of Hi-FISH, a fully automated FISH-based imaging pipeline to quantitatively determine the position of multiple loci in the nucleus. Using this tool, we were able to conduct the first FISH-based genome-wide RNAi screen for factors important for nuclear organization in Drosophila. The screen targeted two heterochromatic sequences, located on different chromosomes, and revealed a complex network of genes that either promote or antagonize interchromosomal associations between these regions, shifting our viewpoint of chromosome interactions towards a more dynamic process. In particular, we isolated the condensin II complex as a major organizing factor that antagonizes chromosome pairing and heterochromatin clustering during interphase, consistent with a general role in antagonizing interchromosomal interactions. Intriguingly, our identification of condensin II as an anti-pairing factor is in line with the intrachromosmal functions of compaction and chromatin looping being a mechanism by which long-range interactions are inhibited. The implications of this model are especially profound with respect to DNA repair, replication, and gene expression.

Inheritance of chromosome positioning. Chromosome positioning plays important roles in genome stability and gene function. However, it remains unclear how this information gets transmitted from mother to daughter cell and whether genome organization, in general, is a component of heritable information through meiosis.  To address these questions, we examined nuclear organization across different developmental time points in the Drosophila germline, from early embryogenesis to adulthood. Using our custom Oligopaint FISH technology, we were able to target multiple regions across the genome and found that the spatial organization of the genome differs between the germline and the soma from the earliest moments of development. It is currently unclear how different tissues could acquire such different organizational fates in the early embryo; however, we favor a model in which germline nuclei actively suppress or delay the mechanisms that drive specific interchromosomal interactions in the soma. This model is consistent with our screen results, described above, that argue for a controlled process reflecting genes that promote as well as those that antagonize these types of interactions.

Recently, my group has successfully scaled the Oligopaint design to label large genomic regions, including whole chromosomes, which we have shown can also be multiplexed to visualize different chromatin states and gene activity (Nguyen and Joyce in prep.). We anticipate this technology will lead to an enhanced ability to visualize interphase and metaphase chromosomes, providing a novel battery of assays to better characterize how chromatin is packaged and spatially positioned in the nucleus and how these events impact genome integrity. Using a candidate approach, we also isolated Cap-H2, a subunit of the Condensin II complex, as a factor that controls chromosome size and chromosome intermixing in Drosophila (Rosin and Joyce in prep.). These analyses show that Oligopaints are robust enough to detect changes in large-scale chromosome organization at single cell resolution. They also show that condensin II is a strong candidate for a complex that drives CT formation in diploid cells, which would represent the first molecule confirmed in a metazoan to have such a function.