The Essential Role of Suicide Hotlines

A key concept that underlies all of these interventions is open communication. Despite decades of destigmatization efforts in mental health, suicide remains a taboo. Discussions about suicide are uncomfortable. There is contentious debate about how we’re supposed to refer to suicide. Threats of involuntary commitment can discourage disclosure. And for too many, silence remains the status quo.

Enter suicide hotlines, which provide 24/7 support to patients in crisis. Hotlines are free and confidential, and are operated by trained crisis workers with next to no wait times. In the US, the largest suicide hotline is the National Suicide Prevention Lifeline (1-800-273-8255), which is made up of over 150 independently operated local crisis centers and the Veteran’s Crisis Line. There are suicide hotlines that cater to more specific needs as well, including the Trevor Project (1-866-488-7386) and the Institute on Aging’s Friendship Line (1-800-971-0016). 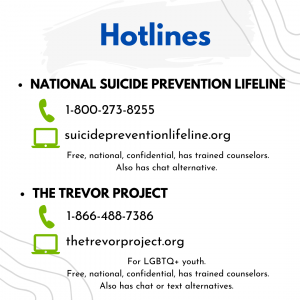 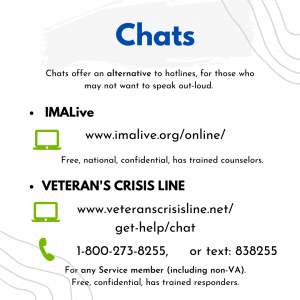 That’s why the recent decision of the FCC to supplement the current 10-digit number with a new three-digit one (988) is both timely and heartening. Suicide is an impulsive decision, and the task of looking up a phone number could be enough to deter reaching out. Soon, there will only be three digits between a person in crisis and immediate support.

Parents/caregivers: need help preparing for + navigating conversations with your kids about the #2020Election?